In Seeing Stars, Dennis J. Frost traces the emergence and evolution of sports celebrity in Japan from the seventeenth through the twenty-first centuries. Frost explores how various constituencies have repeatedly molded and deployed representations of individual athletes, revealing that sports stars are socially constructed phenomena, the products of both particular historical moments and broader discourses of celebrity.

As the first critical examination of the history of sports celebrity outside a Euro-American context, this book also sheds new light on the transnational forces at play in the production and impact of celebrity images and dispels misconceptions that sports stars in the non-West are mere imitations of their Western counterparts. 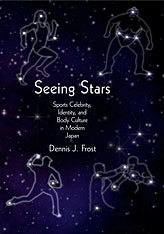