Japanese filmmaker Tetsuya Mariko (b. 1981) has directed a series of arresting and subversive films centered on characters locked into cycles of extreme antisocial behavior. Whether loners who have long abandoned any desire to engage except by their absolute but anarchic rules, or lovers set out on stark revenge, Mariko’s self-absorbed antiheroes inhabit an alternate zone that inverts quotidian reality by sparking cycles of dark violence in broad daylight and transforming banal domestic and everyday spaces into unexpected stages for bleak, brooding yet also darkly humorous theatrical performances. Mariko first gained fame for his Super-8 films made while a student at Tokyo’s Hosei University and then at Image Forum, feverish and autobiographically inspired works that turned inward to channel dark self-reflective fantasies evoking his family history and even including his parents as vocal critics of their son’s work, questioning his risky gambits in sharp and hilarious dialogue that clearly announces the unique intertwining of the playful and painful in Mariko’s cinema. Mariko’s second feature film, Destruction Babies, went even further by offering a violent sociopath as its strange icon, tearing through the streets of a provincial town and challenging anyone who stands in his path to a crazed fisticuff duel. A controversial cult hit in Japan, Destruction Babies continues to be hotly debated for its enigmatically ultra-violent hero, driven ever forward by reasons never made wholly clear. With his latest feature Miyamoto, Mariko turns for inspiration to a popular manga story to create a fable-like revenge tale of a hapless salary man pulled all-too-easily into a savage underworld. – Haden Guest

The Harvard Film Archive is pleased to welcome Tetsuya Mariko, now an artist-in-residence at Harvard's Reischauer Institute of Japanese Studies, for three evenings of screenings and conversations, together with producer Eisei Shu. 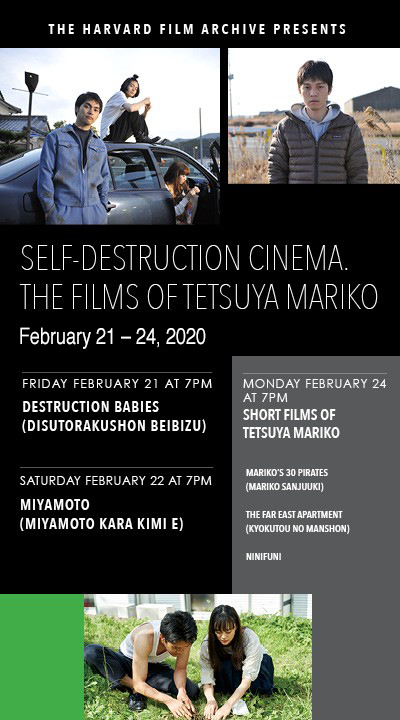