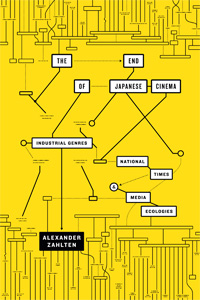 In The End of Japanese Cinema, Alexander Zahlten moves film theory beyond the confines of film itself, attending to the emergence of new kinds of aesthetics, politics, temporalities, and understandings of film and media. He traces the evolution of a new media ecology through deep historical analyses of the Japanese film industry from the 1960s to the 2000s. Zahlten focuses on three popular industrial genres: Pink Film (independently distributed softcore pornographic films), Kadokawa (big-budget productions as part of a transmedia strategy), and V-Cinema (direct-to-video films). He examines the conditions of these films' production to demonstrate how the media industry itself becomes part of the politics of the media text and to highlight the complex negotiation between media and politics, culture, and identity in Japan. Zahlten points to a different history of film, one in which a once-powerful film industry transformed into becoming only one component within a complex media-mix ecology. In so doing, Zahlten opens new paths for uncovering similar broad processes in other large media societies.