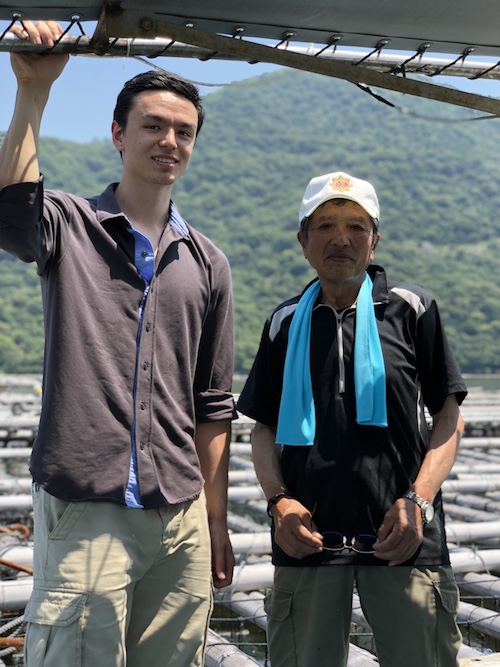 Before Harvard? I spent a year in Japan before coming to Harvard because I wanted to better connect with a culture that is partly my own (I am half-Japanese), but one that was very foreign to me while growing up. My most memorable moment was spending three months at an organic farm in Oita prefecture. Before, I had a romantic conception of farming, but this experience taught me how labor-intensive farming is, and I gained even greater appreciation for the food I eat.

How were you able to continue your interest in Japan at Harvard? I have been taking Japanese language courses for the past three years. I also have been fortunate to spend three summers in Japan. During the summer after freshmen year, I worked at Hotel Sekifu, a traditional Japanese luxury ryokan near Mt. Fuji. Next summer, I interned at Kahoku Shimpo, which is a regional newspaper in Sendai. And for my final summer at Harvard, I spent most of my time in the Northeast region of Japan, but traveled all over the country for my senior thesis research on oysters, which I am currently working on with my advisor, Professor Ian Miller.

Why three summers in Japan? That seems extravagant. It is quite extravagant. I could have done what most Harvard students would do during the summer—for instance, get a consulting job in New York or Washington, DC. But I didn’t do that because it is easy to go to Japan while you are in school. As far as I can tell, that doesn’t seem to be the case at any other point in life. And especially at Harvard, there is a lot of unique opportunities and generous funding to pursue them.

As someone who has been to Japan multiple times, please tell us something about Japan. Japan isn’t just Tokyo. There is a lot to be seen outside of the city. And if you just talk to people, they are incredibly kind to you. While this can be said for other countries, I feel that this is especially true in Japan where there is a strong sense of family and community. I have been welcomed into so many different groups of people.

After Harvard? I applied to the Peace Corps and I have been assigned as a Food Security/ Environmental Education Volunteer in Malawi. I am very excited because it relates to my current academic interest in environment and food systems. But you could say that this all started from that first three months on a farm in Japan. I look forward to exploring and learning about a new culture.

Listen to Motoy's Experience in Japan:

You can watch the full presentation from Destination: World, Powered By Pechakucha event here.